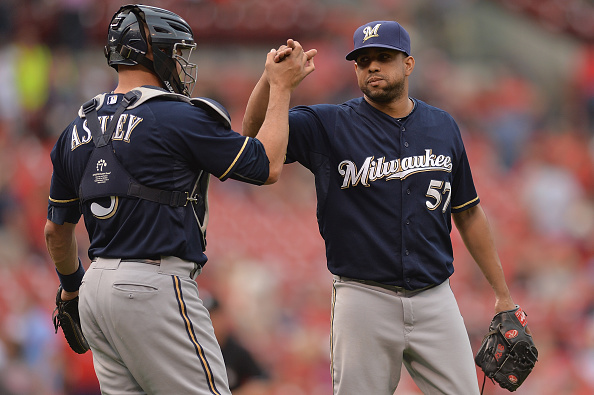 Hopefully this move works out better for the Tigers than the previous ones. On Wednesday the Detroit Tigers acquired closer Francisco Rodriguez from the Milwaukee Brewers in exchange for infielder Javier Betancourt.  During his 14-year career the 33-year old has racked up 386 saves along with a 2.69 ERA between stints with the Los Angeles Angels, New York Mets, Milwaukee Brewers (Thee Times!) and Baltimore Orioles.

“K-Rod” is now yet another attempt by the Tigers to bring stability to a volatile relief situation. Ever since Jose Valverde came down to Earth the team has shuffled through the likes of Bruce Rondon, Jose Valverde again,  Joe Nathan and Joakim Soria. Now they’ve landed on Frankie in hopes that they’ll finally get it right.

The Brewers continue to tear down and rebuild.  Betancourt is 20 years old and has yet to make the jump to Double-A. He has had a less than stellar minor league career, however. Last season he batted just .263 with three home runs and 48 RBI with High-A. He profiles as more of a utility player, displaying an ability to play both middle infield positions as well as third base.

Rodriguez seemed like an obvious trade piece. In fact, it’s odd that he wasn’t traded last season when Carlos Gomez, Mike Fiers and Aramis Ramirez were dealt before the July 31st Non-Waiver Trade Deadline. It now stands to reason that anyone on the table may be bought for the right price. That means guys like Jean Segura or Scooter Gennett and perhaps even Ryan Braun, the one time face of the franchise, could be traded. First baseman Adam Lind seems the most likely to go as he’s still on the cheaper side and power hitting first baseman are always in high demand.

Al Avila, the Tigers’ new general manager is one of the more interesting offseason players to watch. After the team’s poor showing last season which culminated in the dismissal of rock star general manager Dave Dombrowski the team turned to Avila to right the ship. He may be looking to make a real splash this offseason. This move could be the beginning of things to come. Keep an eye out for the Motor City Big Cats this offseason.

Matthew Mirro is a student at the University at Albany, New York. Originally from Long Island, Mirro is a journalism major with minors in political science and history. A political junky, aspiring historian and sports fanatic, Mirro has written for other publications including Baseball Magazine and the Albany Student Press. He hopes to pursue a career as an author. View all posts by Matt Mirro