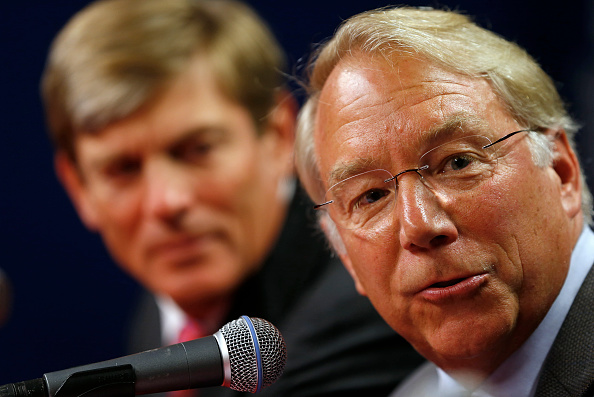 The Philadelphia Phillies took their first step towards the future when they formally announced the hiring of Andy MacPhail as a special consultant to current Team President Pat Gillick for the remainder of the season before being made the Team President at the end of the year. The Philadelphia Phillies are clearly in need of some big changes; they currently have the worst record in all of baseball and are somehow in rebuilding mode without actually being in rebuilding mode. The Phillies are in need of a bottom up rebuild of the roster and yet they still have large contracts such as Cole Hamels, Ryan Howard, Chase Utley, Jonathan Papelbon, and Carlos Ruiz still on the roster. Most of these guys are nearing the end of or at least are in the second half of their careers and are from a time when the Phillies were a consistent playoff team and World Series contender.

What the hiring of MacPhail represents is the first step towards a full rebuild that should have already been in full swing. Given his current position as merely an assistant to the current President of the Phillies it seems an odd situation to say the least. MacPhail has been hired to merely consult and evaluate the state of the organization before taking over at the end of the year and really starting to make changes and take the organization in a different direction. Until this time, the Phillies organization will be stuck in a strange limbo between the old regime and the new regime. Ruben Amaro Jr. is still the general manager for the time being (and will be making the decisions at the trade deadline) and Pat Gillick remains the Team President for the remainder of the season.

Andy MacPhail is a front office mind with numerous years of experience and is really just the guy the Phillies need going forward into a full rebuild. MacPhail turned 62 years old this April and has been in the game of baseball since 1976 when he got his start with one of the Chicago Cubs minor league affiliates. He then moved into player development with the Cubs before joining the Houston Astros as the assistant director of scouting in 1981 before becoming the assistant to the general manager in 1982. After this he moved on to the Minnesota Twins as the Vice President of Player Development in 1984 before becoming the General Manager in 1985. Under MacPhail the Twins would go on to win two World Series in 1987 and 1991 and MacPhail would win an executive of the year award in 1991 after a worst to first turnaround. After the 1994 season, MacPhail joined the Cubs as President and CEO and stayed with the team through 2006 leading them to a few playoff appearances. In 2007 he was hired by the Baltimore Orioles as President of Baseball Operations and spearheaded trades that brought Adam Jones, Chris Tillman, Chris Davis, Tommy Hunter, and J.J. Hardy to Baltimore. Following the Orioles 14th consecutive losing season in 2011, MacPhail stepped down from his position with the Orioles. He would take a few years off before finding his newest job in the Phillies organization.

MacPhail has significant experience in several front offices around baseball and brings that vast experience with him to Philadelphia. MacPhail has also shown great success in both player development and bringing teams from worst to first in short periods of time. This may be most important to the Phillies who find themselves at the bottom of the NL East and really the bottom of nearly the entire Major Leagues. Andy MacPhail is really just the guy for the job in Philadelphia. If anyone can turn around the Phillies it is him. With that being said MacPhail has a lot to do going forward and has a lot of things to focus on for the remainder of the 2015 season before taking over as Team President going forward next year. MacPhail has five main issues plaguing the organization that need to be addressed going forward.

If there is one man who is loathed more than some of the players in Philadelphia it has to be Ruben Amaro Jr. There has been a lot of criticism sent his way on what direction the Phillies are going in. Many in the offseason thought the Phillies clearly stood as a team in need of some rebuilding with both an aging roster and a somewhat barren minor league system. Many executives and baseball analysts actually believed the Phillies should have begun their rebuild two or three years ago. What is clear now is that the Phillies have many players that need to be traded in order to really go into full rebuild mode. This starts with firing Ruben Amaro Jr. as soon as possible. It has already been said by MacPhail and current president Pat Gillick that Amaro’s job is safe through the end of the season. On top of that, it has already been said that Amaro will be in charge of all the Phillies deadline dealing with MacPhail only acting in an advisory role. This may be a mistake given Amaro’s track record as a bit of a stingy GM who does not pull the trigger on a deal unless he gets an absolutely perfect return. It should be an interesting trade deadline with Amaro still at the helm but it seems almost certain that MacPhail starts the rebuild from the ground up by firing Ruben Amaro before next season.

2. Find a General Manager Plus a Manager to Lead the Team into the Future

Given the likelihood of firing Ruben Amaro following the season, MacPhail’s next issue to address on his to-do list is finding suitable replacements for both Amaro and for recently resigned coach Ryne Sandberg. For the short-term it seems the Phillies will attempt to go forward with third base coach Pete Mackanin as the interim manager through the end of 2015. It’s hard to say who MacPhail will tab as his new General Manager and manager but he will most certainly get a manager who fits his preferences along the lines of his manager in Baltimore Buck Showalter. He also has ties to several executives and coaches around the league and several candidates could be in line for either the general manager job or the manager job. Recently fired Padres manager Bud Black has even come up in some conversations to be the new manager for the Phillies under MacPhail.

During his opening press conference, MacPhail acknowledged the young talent of the Phillies future numerous times. This is what needs to be built on going forward. Whether it be Ruben Amaro or a new general manager completely the Phillies organization needs to have an “out with the old, in with the new” sort of mindset. All the leftover pieces from the Phillies previous run of playoff appearances need to be moved in trades sooner rather than later. The Phillies immediate focus needs to be acquiring as much young, cost-controlled talent as possible in order to put themselves in the best position to win long-term. It is simply not possible that the Phillies will compete again any time soon with an aging roster and a farm system with not much big impact talent. The Phillies could learn a lot from their immediate rival Atlanta Braves organization that has gone into full rebuild mode and has already seem some positive results with the many young talents they have acquired.

One criticism that has been heard frequently over the last few days about the Philadelphia Phillies organization, and Ruben Amaro Jr. in specific, has been the teams lack of sabermetrics use and the overall backwardness of how the Phillies operate both on the field and in the front office. On the other hand Andy MacPhail is a guy known for his positive embrace of sabermetrics and has ridden the sabermetric wave to success in a few different organizations including most recently with the Baltimore Orioles playoff runs following his departure. The Phillies have been ranked near the bottom of baseball in terms of their use of advanced statistics and analytics and MacPhail was brought on by the new ownership to both change this perception and introduce more sabermetrics into both the front office and on the field. With this in mind it seems one of MacPhail’s main focuses beyond finding the right general manager and manager should be on building up a strong analytics department in Philadelphia and building a team that is more analytically driven.

5. Focus on development of young talent

The final issue that must be focused on by MacPhail is the accumulation and development of young talent to build towards the Phillies future. The Phillies have a stud already at the big league level in Mikael Franco but aside from him both the Major League roster and the farm system lack the impact talent that the Phillies can build a future team around. Beyond Franco the Phillies have a strong shortstop prospect in J.P. Crawford and 22-year-old RHP Aaron Nola but lack much organizational depth past these few players. All three of these guys are top 30 prospects and will have a role to play on the Phillies in the future but the Phillies need to acquire and develop more talent around them if they hope to compete sooner rather than later. With this lack of organizational depth, the focus for MacPhail needs to be on not only trading away older pieces in order to acquire more depth but also on better drafting and more in-depth scouting in international markets such as Cuba, Venezuela, etc. The Phillies find themselves in a bit of a bad spot with both an aging roster and a lack of organizational depth and must take unconventional steps to rebuild the talent pool and rebuild the roster into a winner once more.

Andy MacPhail has only been on the job for a few days now and it seems he has an almost insurmountable task of taking a Phillies team from the peak of mediocrity and attempting to make them into a winner once more. It is clear that it will be at least three or four years until the Phillies are ready to compete again and it may take a Houston Astros type rebuild in order to make that happen. MacPhail must evaluate the several issues that are holding the organization back and find remedies to these problems in order to take the Phillies out of the stone age of analytics (and the glory of past success) and take the organization into the future with a new general manager, a new manager, a younger Major League roster, and an organization with more minor league depth. So far this year it has seemed that the awful Phillies have needed some sort of miracle to turn things around. Despite the organization being at its low, If anyone can turn a loser into a winner its Andy MacPhail.

You can find Patrick on twitter @PatrickBrewer93 and join in the discussion @CTBPod or on our Facebook page.

One thought on “The Future of the Phillies: The Andy MacPhail Era”

My name is Patrick Brewer. I am 22 years old and a recent graduate of UCSD with a Bachelor's degree in Political Science with an emphasis in International Relations. I have been a lifelong Padres fan and hope to one day work in an MLB front office. View all posts by Patrick Brewer