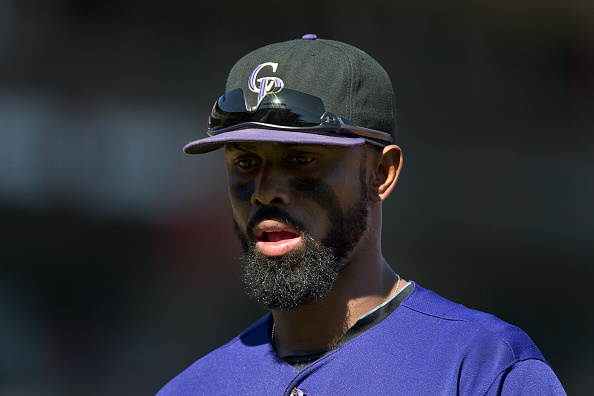 Monday night, it was revealed that Colorado Rockies shortstop Jose Reyes was arrested on October 31 for allegedly grabbing his wife Katherine by the throat and throwing her into a glass door in a Hawaiian hotel room. Katherine Reyes left with significant injuries, and Reyes is now being investigated by Major League Baseball.

Colorado’s $22 million 32-year-old shortstop now has to face the possible wrath of MLB’s new joint domestic violence policy with the Players’ Association that was instituted during the 2015 regular season.

The policy came out in response to numerous mishandled cases regarding violence against women in the NFL and NHL, and while treatment, intervention and confidentiality are all parts of the agreement, Commissioner Rob Manfred has the power to discipline any player for “just cause.” When the policy was revealed over the summer, Manfred said that he believes “these efforts will foster not only an approach of education and prevention but also a united stance against these matters throughout our sport and our communities.”

Major League Baseball’s operational foe, the Major League Baseball Players’ Association, stood firm with the new commissioner on the policy. Executive director Tony Clark noted that he was “hopeful that this new comprehensive, collectively bargained policy will deter future violence, promote victim safety, and serve as a step toward a better understanding of the causes and consequences of domestic violence, sexual assault, and child abuse.”

There you have it. From the mouths of the game’s most trusted steeds. It’s admirable for one of the Four Major sports leagues to want to change the handling of domestic violence and violence against women since all of them have been horribly relaxed in their management of it. Cases like Greg Hardy and Ray Rice in the NFL or Mike Ribeiro and Slava Voynov in the NHL should make any human being’s stomach turn.

Those four case studies above are why this policy exists, and for all of those well-intended wishes Manfred and Clark heaped onto this new policy, Jose Reyes is their first chance to show how seriously they take it.

Charles Barkley wrote a piece for Bleacher Report about Greg Hardy that could apply to this situation as well, and he was half right; Reyes deserves an opportunity for therapy and help, because abuse like this is certainly manifested from some other sort of mental or emotional problem.

This doesn’t change the fact that this therapy should take place off a baseball diamond during a lengthy suspension. When Reyes puts on his jersey and takes the field, thousands of fans will cheer in reverence towards him (as we know they would based on past instances of these things), and enough of that will aid in repairing his ego so he can forget all about this. The $22 million check from the Rockies at the end of the season wouldn’t hurt, either.

He shouldn’t be allowed to do that; he should face the consequences of his actions and deal with them head on. Because Katherine Reyes certainly has to live with what happened on October 31 forever.

In a piece for the New York Daily News, John Harper wrote that, unless an investigation proves (key word) his innocence, Jose Reyes should serve an 81-game suspension, which seems like a reasonable length. It doesn’t matter if Reyes is known as “one of the good guys,” he doesn’t deserve a pass because of that. “Good” people have to face consequences of their actions all the time. And a full offseason plus a discipline of 81 regular season games would allow Reyes to receive treatment, while giving him a chance to redeem himself and go on with his life afterward.

In that redemption period, however, teams reserve the right to not want such baggage on their team in the future, and fan’s are equally allowed to be critical as they are supportive.

Reyes is set to appear in a Maui court on November 24, and conviction or not, the ruling should not change MLB’s course of action. This is an important moment in Rob Manfred’s tenure as Major League Baseball’s commissioner that can define a portion of his legacy. As Manfred’s peers in the NFL and NHL have handled violence towards women with kid gloves and treated heinous crimes as mere delinquencies, Manfred can separate himself from the belief that professional sports are a man’s club where women can be marginalized and make progressive steps forward in the movement against domestic violence.

He just has to make sure he does it.

Public radio reporter and host. Illinois State and University of Illinois alum with a bachelor's in broadcasting and a master's in political journalism. View all posts by Zach Bernard