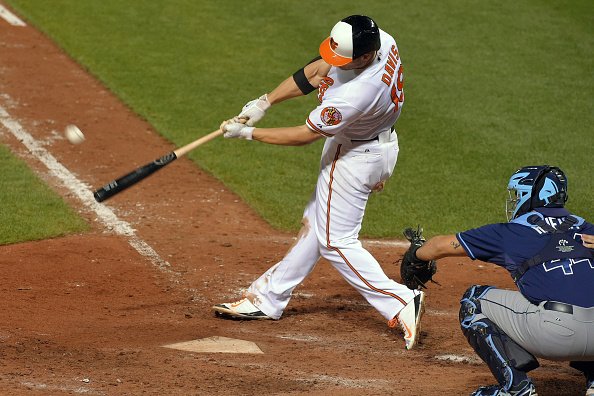 Monday afternoon in the Bronx, the Baltimore Orioles may have sealed their own fate come October. None whatsoever.

Down 8-5 at the top of the eighth inning, Yankees right-handed reliever Dellin Betances struggled to find the plate opening up his appearance, walking Chris Davis and Jimmy Paredes to begin his proceedings. He struck out Jonathon Schoop and Nolan Reimold there after… before ending up walking Ryan Flaherty to load to bases with two outs. Because leaving two men on base isn’t clutch enough for the gargantuan fastball pitcher.

What unfolded in the next at-bat pretty much summed up the recent struggles of the Orioles. For Caleb Joseph, with the potential of at least slicing the lead to just one run, getting caught swinging before a slick change-up was a little too much for the stellar backstop. Leaving the bases loaded; a massive buzzkill for a club that should be running out of buzz in that department as of late given their post-All Star break slump.

Slamming the bat in anger; breaking the bat through his leg and he slowly walked to the dugout concluded the top of the eighth inning. Pure, raw emotion from the Baltimore Catcher who has more than stepped up offensively with the injury issues surrounding Matt Weiters this year. Joseph would not carry out his usual time for press conferences after the game. Accountability is necessary after a game like that; it’s part of the job that has to be taken with dignity and pride. Even when having to labor through a less than stellar outing by starter Wei Yin Chen and the dreadful appearance by reliever Jorge Rondon, the Catcher needs to pick up the slack from whatever happens between the mound and home plate and help soldier the team onwards.

It will be a learning curve for sure, but boy did it show off a lot of the frustration from a ball-club that has seen their pitching staff linger into old habits. During the month of August, the Orioles team ERA was a bloated 4.37, which is second only to the month of April (4.78). 127 earned runs crossed the plate against Baltimore last month; the only month this season in which the team has surpassed triple digits.

Too many runs have been allowed. Caleb Joseph knows that more than anyone in the clubhouse. I’m not a psychic; he might have had that in his mind stepping up to the plate in that eighth inning. Having to come up with an extra base hit off of Dellin Betances to at least cut the lead that late into a ball-game? I would be a little annoyed at the very least that the Orioles had allowed 8 runs to that point.

Brian Matusz, the Orioles left-handed reliever who gave up the eighth and final run by the Yankees in that game, took the disappointing outing on the head and carried out his off-field routines as per usual. Press conferences, interviews and recordings; as if nothing had happened at all. Professional and accountable; two key traits that are consistent in the clubhouse under skipper Buck Showalter, regardless of the team’s status and their position in the standings. It’s not to say that it excuses Matusz and how it reflects the lack of a complete performance from the Orioles. Letting the close lead open up on a 0-2 count? That would definitely sting given the Orioles loosening grip on any chance of a Wild-Card spot come October.

The Orioles have always been on the cusp of being a mediocre team for quite some time. Showalter has been brilliant in calling up players and signing journeyman veterans at just the right time. Great examples are Steve Pearce and Delmon Young last year and Jimmy Paredes this year. But such veterans are fading and creating holes in the line-up. Their seemingly longtime pitching staff has slowly decayed in 2015 with Ubaldo Jimenez, Chris Tillman and Miguel Gonzales slumping spectacularly down the stretch. It’s as if the dirt has crumbled beneath them this summer and has made postseason probability more or less out of reach.

Accountability is needed from the Orioles as a whole organization. You can only do so much with lingering veterans who have such a strong vibe within the clubhouse, such as the returning Nolan Reimold for example. Believe me, there are almost too many players like that on the Baltimore Orioles. But after a certain extent, production is needed, especially when your team was contending all the way up until August.

But that status as a contender is all but taken away given the circumstances.

The major league club is flat. The minor league system beyond pitcher Hunter Harvey is flat (because I struggle to see any production from an injured Dylan Bundy). Their answer won’t come until the offseason, which is probably the biggest frustration for Orioles fans. September becomes a month that hopes to right the wrongs made this summer on the field and a chance to see any remote chance of future impact players such as Dariel Alvarez and Christian Walker.

The summer hasn’t been kind to Baltimore this year, and it’s time that accountability transcends into change moving forward.

You can find Darren on twitter @DarrenHelley and join in the discussion@CTBPod or on our Facebook page.

Follow me on @DarrenHelley and catch my tweets and opinions surrounding my Atlanta Falcons and Baltimore Orioles. And check out my AFC North reviews for UKEndzone, where I dive into the week-to-week and season-long story-lines for all four divisional teams. Also make sure to check out my Hotlanta blog, which allows you lucky participant to be indulged and pulled into the dimension that is my 12-year love-affair with the Atlanta Falcons. http://darrenhelleyhotlanta.wordpress.com/ View all posts by DarrenHelley