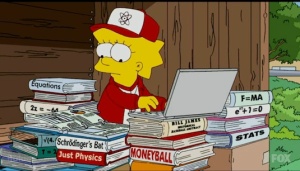 Ever since the release of Moneyball it seems that baseball has only gotten more complex. Baseball used to be as simple as measuring a player’s batting average to know their true talent level. With the advent of the Moneyball strategy, the focus turned from batting average to on base percentage. Over the years it has expanded further than that. Now a batter’s value is measure by WAR, wRC+, WOBA while a pitcher’s value is measured by FIP, WHIP, SIERA, xFIP and a defender is measured by UZR and so on and so forth. More so than ever before baseball has become more complex, and yet understanding of the ins and outs of the game has never been higher or more clear.

For many these new measurements of talent and performance read like a complex foreign language. With this series of articles, I am hoping to explain some of this terminology in more depth and demystify some of these advanced sabermetric concepts for the casual baseball fan. Baseball has advanced quite a bit over the last ten to fifteen years in terms of statistics and has left many casual baseball fans behind.

To begin our discussion, it helps to have some base point to compare to. For this we will use ERA, which is a generally well understood statistic that has been used for decades. For those that don’t know ERA stands for earned run average and measures how many runs a pitcher gives up relative to how many innings he has pitched. A very simple calculation used whereby ERA equals earned runs divided by innings pitched and then multiplied by nine. Therefore if a pitcher gives up nine runs in nine innings his ERA would be an even 9.00. This statistic has limits, however, because it does not take into account defense, batter/pitcher luck, or sequencing of hits. Generally speaking, an ERA of 3.75 is considered average with the best ERAs falling between 2.50 and 3.00.

To expand on the ERA statistic, WHIP has now gotten more common usage in the sabermetric world. At its basis WHIP measures how many walks and hits a pitcher has given up per inning and is used in tandem with ERA to measure a pitcher’s performance. While ERA simply tells how many runs a pitcher gives up, WHIP more specifically looks at hits and walks to give better context to a pitcher’s base ERA. Similarly to ERA, the WHIP statistic has several shortcomings due to the luck that is involved with a pitcher or hitter’s BABIP numbers. Generally speaking, a WHIP of 1.25 is considered above average while a WHIP of 1.00 is considered to be excellent.

With this two simpler measurements in mind, it is time to address some of the flaws in ERA/WHIP in order to find a more comprehensive measure of a pitcher’s performance. This is where the FIP statistic comes in. FIP stands for fielding independent pitching and basically is the same as the ERA measure without outcomes that involve defense. Basically FIP is a measure of a pitcher’s performance that takes out luck, defense, and sequencing to get a better measure of performance. FIP focuses on home runs, strikeouts, walks, and hit batters which a pitcher does have control of independent of defense and luck. In general a pitcher’s FIP and ERA will be somewhat close, unless there is poor defense, bad luck, or weird sequencing of outcomes involved. Similarly to ERA, an above average FIP is somewhere in the 3.00 to 3.50 range with the best pitchers having FIPs under 3.00.

As a further attachment to FIP there is another similar statistic called xFIP. xFIP stands for expected fielding independent pitching and basically serves as an extension to what is calculated in FIP. The only real defense between FIP and xFIP, is that xFIP assumes a league average BABIP as well as a league average home run/fly ball rate. Home run rates are generally unstable over time so xFIP is able to correct for this discrepancy in some pitchers. xFIP holds similar values as FIP and therefore above average is considered to be in the 3.00 to 3.50 range with the best pitchers having xFIPs of under 3.00.

So ERA measures earned run average, WHIP measures walks plus hits per inning pitched, FIP measures fielding independent pitching, and xFIP measures expected fielding independent pitching. One final statistic for these purposes is the SIERA statistic which stands for skill interactive earned run average. This statistic is an attempt to measure the skill level of a certain pitcher. SIERA attempts to quantify the importance of strikeouts, walks, and balls in play to a pitcher’s performance. SIERA is only slightly more predictive than the previous statistics but does more to measure the how and why of pitching. Once again SIERA holds similar values as both ERA, FIP, and xFIP where anything in the 3.00 to 3.50 range is considered above average or great while the best pitchers have SIERA scores under 3.00.

One final group of statistics that warrant discussion are the ERA-/FIP-/xFIP- statistics. These three statistics are basically the same as their counterparts except for the fact that they are adjusted for park and league factors. These may be more complex measures than simple ERA/FIP/xFIP but they allow more easy comparison between players in different leagues and different home ballparks. These are similar to wRC+ and OPS+ in that they allow pitchers to more easily compared to one another because of these adjustments. In the same way that the league average wRC+ is 100, the league average of all three of these stats is 100 as well. Therefore anything under 100 is above average with the best pitchers holding numbers in the 70s.

Patrick Brewer is the Lead National League writer for Call to the Bullpen. You can find him on Twitter@PatrickBrewer93, or join in the conversation @CTBPod, in the comment section below or on our Facebook Page.

My name is Patrick Brewer. I am 22 years old and a recent graduate of UCSD with a Bachelor's degree in Political Science with an emphasis in International Relations. I have been a lifelong Padres fan and hope to one day work in an MLB front office. View all posts by Patrick Brewer