Part Three of Anthony Rescan’s series as he proposes ways to turnaround the Chicago White Sox. You can find part one here and part two here.

After targeting the biggest trade pieces the White Sox have, it is time to look at some of the other loose ends that need to be tied up. The White Sox need to consider their roster construction going forward as to how to handle its players. In general, I believe that a one to two-year rebuild window is realistic and feel that the roster should be planned accordingly. That would mean identifying who would be best served to be jettisoned for futures to maximize their value and who is just not going to be a part of the winning teams in the near future.

Jeff Samardzija does not fit with the White Sox. As Ryan Davis of BP Wrigleyville noted, there have been some adverse changes in the way Samardzija pitches since he has joined the club. The biggest change has been the increased use of his cutter. 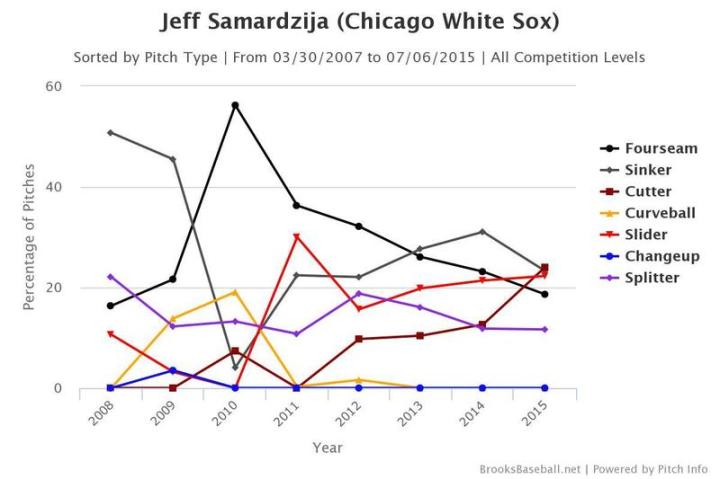 He has used the cutter in lieu of his fourseamer and it has resulted in a strikeout rate that has dropeed from 23% in 2014 to 19.8%. He is also getting hit harder with an overall BABIP of .323. Those balls in play tend to expose a porous White Sox defense. Currently, the White Sox boast a defense where only one, full-time regular, Melky Cabrera, boasts a positive DRS. All in all, this has been a bad situation for Samardzija. A change of scenery will do both parties well.
The Astros are a surprise to most. They have added a metric ton of talent over the years and it is finally coming up and producing. One area they could use some help at though is with starting pitching. Top prospects Vincent Velasquez and Lance McCullers have come up and pitched extremely well. But, with their youth and the revolving door that is their #5 spot, it may be best served to bump everyone other than Keuchel down a spot with adding Samardzija. Collin Moran seems like an easy target for the White Sox. Often touted around as a Bill Mueller-type third baseman, Moran is a bat first type who is relatively average defensively. Moran is skilled with the bat and will be able to solidify the White Sox’ third base position soon as he is looking to finish a full year at Double A.

Robertson is an interesting case for the White Sox. From a pure performance standpoint, signing him has worked wonderfully. He has quickly emerged as one of the best signings from the past free agent class in that regard as he has been a 1.2 win player with a 35.3% strikeout rate to only 5% walks. He also fills a need in a White Sox pen that has been atrocious over the past few years. However, his skillset is hard to fully use on a losing team. The high leverage opportunities that Robertson is made for do not come up very often with the White Sox. Given that I am proposing a rebuild, Robertson’s best years would be wasted on the Southside and it would be better off to look for future assets.
Robertson seems to be a perfect fit on the Northside. With the Cubs’ bullpen woes and stance to be competitive for the foreseeable future, Robertson would be a fantastic add at the end of that bullpen. The Cubs also have a very interesting asset that makes a ton of sense as trade bait in Dan Vogelbach. Vogelbach is without a position with the Cubs. He could maybe play first base, but Anthony Rizzo has that locked up for the next decade. On the White Sox, he could showcase his bat from the DH slot and focus his time there. Vogelbach is already an advanced hitter who walks, limits his strikeouts, and produces at a good rate. The power is still developing, but it is hard to think that a 260 lb player who hits like Vogelbach won’t realize his power.

I am going to put this very simply. It is time to move on from the idea that Avisail Garcia is a long-term piece. Garcia was touted as “Little Miggy” coming up in the Tigers organization. Garcia had many of the tools that you look for in a young, international signee. Yet, he has failed to put those tools together at the major league level. Garcia does not hit for power noted by his .114 ISO in 2015. He also does not supplement that with walks, but rather strikeouts. On top of that, he has absolutely no business on the grassy part of a baseball field. Garcia, this season, has accumulated an astoundingly bad -9 DRS in 605 innings in right field. Couple that with a -10 mark last season in 401 innings. Simply put, Avisail Garcia is not a good baseball player. He should never be asked to contribute to a White Sox winner.

You can find Anthony on Twitter @AnthonyRescan or join in the conversation @CTBPod or on our Facebook Page.