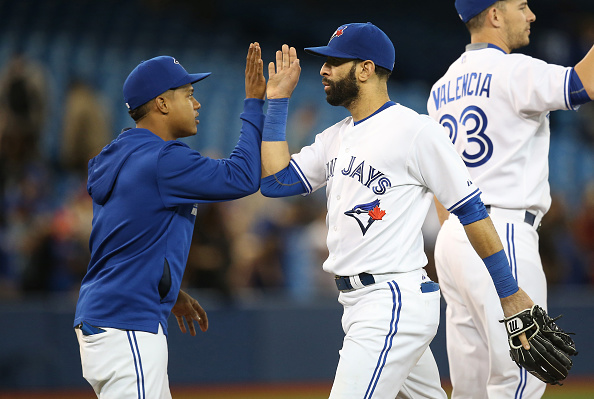 What is below is an attempt to lay-out what would be the most entertaining potential playoff match-ups this year.  Obviously, if your team is left out you won’t be rooting for these to happen.  For the others though, you might want to consider getting excited about these possible match-ups.

Bat flips.  Personalized home run trots.  Beards.  Mullets.  What else could you want?!  A look at the numbers, you say?  They are one and two in the AL in run-differential.  They are one and two in all of baseball in home runs.  Toronto is a little more top-heavy but both lineups top-to-bottom have guys who can change a game with one swing (the Jays have 6 players with double-digit home run totals; the Astros have 9).

They also both made big improvements at the deadline acquiring a premier pitcher (David Price and Scott Kazmir) and bat (Troy Tulowitzki and Carlos Gomez).  Try not to salivate when thinking of a Price/Keuchel game one match-up, and game five if we’re so lucky.  Add in the wrinkle of this series ending long playoff droughts for both teams and you’ll have two extremely excited fan bases.

If this were to occur my only request would be that every run be scored via home run.

The Royals lead the league in making teams mad while the Yankees are number one at getting mad.  That’s what you call a perfect storm.  I can’t wait for Jarrod Dyson to pinch run in the 8th inning, steal second base, and pop-up to do his dance just to watch Joe Girardi fall over out of complete shock at the lack of respect those hooligans show.  This is the clean-shaven “Yankee way” vs. the Mohawk-growing and pitching-inside “Royal way”.

Two surprise teams no one gave a legitimate chance to be here, so why not.  Both teams have gotten to this point quicker than expected and feature some of the game’s best, young players.  Just imagine the lineup of Kris Bryant (23), Kyle Schwarber (22), Anthony Rizzo (26) and Addison Russell (21) facing the starting pitching of Matt Harvey (26), Noah Syndergaard (22), and Jacob DeGrom (27).  This could be the start of a perennial playoff match-up we get to watch for the next 5-10 years.

The managers would also be a great storyline.  Despite their contrasting styles, they’ve both done a fantastic job maximizing their rosters and are easy to root for.  I’d have no problem at all with Terry Collins or Joe Maddon getting a ring.

These two teams are some of the most frequent playoff teams there are so this match-up seems pretty fitting.  Although they both have constant regular season success they’ve achieved it different ways.  The Cardinals do a great job of keeping a strong veteran / young player mix, therefore keeping their payroll at a manageable level.  The Dodgers are in the same mode as the Yankees from ten years ago:  buy, buy, and buy some more.

The real intrigue is the one-two punch of Clayton Kershaw and Zach Greinke against the Cardinals’ lineup of guys who just know how to get it done in October.  Matt Carpenter is an on-base machine with power.  Yadier Molina has regressed some this year but he’s been a clutch-hitter throughout his career.  On the Dodger side don’t forget that Jimmy Rollins and Chase Utley are former world champions in the final year of their contracts, which could possibly add an extra desperation to how they play.

The only disappointing aspect is Yasiel Puig is the only real chance for some bat flips.

If your team wasn’t included it’s nothing personal.  These are just the postseason match-ups that offer the most intrigue and entertainment, which hopefully includes bat flips.

Mike McCollum is a Featured Writer for Call to the Bullpen. You can find him on Twitter @mikeyballTX, or join in the conversation @CTBPod, in the comment section below or on our Facebook Page.